May 8, 2020 -- A team from Metz Middle School has won second place in the state in a competition where students create a solution to a community problem. With help from their team advisor, Integrated Math and Science (IMS) Teacher Carey Hancey, a team of eighth graders invented a prototype that reduces carbon dioxide emission from cars.

“As their teacher, I am so proud of their achievement and overall perseverance to do well,” Hancey said. “They certainly deserved this accolade!”

The students competed in eCybermission. Presented by the U.S. Army Educational Outreach Program, eCybermission is a web-based science, technology, engineering, and mathematics (STEM) competition research competition where teams of three or four students identify and solve community-based problems using either the engineering design process or the scientific method.

Students choose a “mission” in categories such as: alternative sources of energy; environment; food, health and fitness; national security and safety; robotics; or technology. Once a team chooses its mission and identifies what problem it would like to address, teams conduct research, write a hypothesis, and conduct experiments. Each team submits a comprehensive analysis of their project for scoring, which includes team collaboration, engineering design, and community benefit.

The winning team, named Hydra, consists of Isaac Hertz, Audrey Peters, Nina Nicoletti, and Noah Wilsher. The team sought an environmental solution to lower carbon dioxide emission from cars. According to Hancey, their project solution entailed building a prototype that extracts carbon dioxide from car exhaust using soda lime. The trapped carbon dioxide can be freed by a reversible process and directly applied to plants as opposed to the atmosphere, she explained.

“This team excelled in collaboration and their collective passion in research translated into a meaningful solution,” Hancey said. “This team was always dedicated in prototype testing and made improvements where necessary.  They were committed to the engineering design process, which included well-written accounts of their experiences.”

Along with this honor, each of the four students will receive a $500 savings bond.

Submissions to compete in eCybermission were due in February. Judging is conducted by STEM professionals from across the country.

“What we have are great thinkers, problem-solvers and leaders,” said Metz Principal Dave Rupert of the IMS students during a school board presentation in February. He said he is proud of these students who represent Metz and Manassas City Public Schools so well when they travel for competitions. 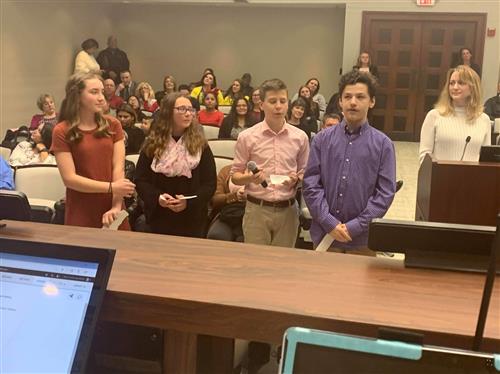 The team presenting their work to the school board. From left to right are Audrey Peters, Nina Nicoletti, Issac Hertz, and Noah Wilsher.  At the podium is team advisor, Ms Carey Hancey.