May 20, 2020- The School Board of the City of Manassas has appointed Dr. Eric V. Brent as the executive director of student services for Manassas City Public Schools (MCPS). The approval was made during the school board’s special meeting on May 19. Brent will begin his new assignment on July 1, replacing Dr. Rebecca Stone, who has been named superintendent of schools in western Arizona.

“I am impressed with Dr. Brent’s dedication to students and his reputation of putting them first,” said Kevin Newman, superintendent of schools. “He received glowing references that not only confirmed his dedication but spoke to the high level of professionalism he demonstrates to ensure student success.”

In his new role, Brent will provide leadership, management, and coordination of the overall functions of student services to include special education, federal programs, child welfare, attendance and transfers, health and prevention services, discipline, and athletics.

Brent currently serves as the region executive principal of Fairfax County Public Schools, where he supports the assistant superintendent and provides instructional leadership, management, and administrative advocacy for approximately 40 schools. He has more than 30 years of experience in public education, including 17 years as a high school administrator in both Fairfax and Prince William counties.

Brent began his career as an awareness aide at Mount Vernon High School. In the following years, he served as a special project teacher and school counselor in several capacities. In 1997, Dr. Brent was named Mount Vernon High School’s Director of Student Services, and two years later he became the assistant principal. Brent has served as principal of Mount Vernon, West Potomac, and Forest Park high schools. In 2009, he was awarded Prince William County School’s Principal of the Year.

An active member of the Apple Federal Credit Union Board of Directors, Brent has also served on the Virginia Association of Secondary School Principals and the Urban League Scholarship Committee, and he is a member of the Association for Supervision and Curriculum Development and the Council for Exceptional Children.

Brent graduated from James Madison University with a bachelor’s in marketing education. He received his master’s degree in student services and secondary counseling and a doctorate in educational leadership and policy studies from Virginia Polytechnic Institute and State University. He has a certification in educational supervision and administration from the University of Virginia, and endorsements in marketing education, secondary school counseling, administration and supervision (PreK-12) and division superintendent. 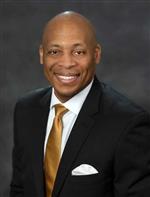