Second graders at Jennie Dean have been practicing their writing skills as they write letters back and forth with their pen pals—players from the University of Delaware softball team. On Friday, February 28, 2020, those students were able to meet their pen pals face-to-face when the Blue Hens, who were in town for a game at George Mason University, took some time to stop by Dean.

The meeting was orchestrated by second grade teacher Courtney Steele who has been teaching at Dean since 2012. Her sister, Jen, is the head coach for the University of Delaware, making this a perfect matchup.

“A few years ago, she was at Longwood University and her players wrote back and forth with my kids. The kids absolutely loved it,” Ms. Steele said.

This year, they decided to do it again.

“I want my students to get better at writing and communicating,” Ms. Steele said. “Today everyone is so used to texting, talking on the phone, and FaceTime, so they’re used to being able to answer questions in real time. It’s been a bit of a challenge for the kids to understand that they need to write what they want to share in complete sentences.”

She said she has noticed improvements in her students’ writing since beginning the project.

“I also want them to see what life in college can be like,” Ms. Steele added. “I know a handful of them have dreams of playing sports when they’re older, so I think it’s important for them to see successful student-athletes.”

In their letters, students and players exchanged notes on their favorite hobbies, colors and school subjects. The Blue Hens hand delivered their latest letters.

One by one, players and coaching staff unloaded the bus at Dean. Once inside, they were greeted by the anxious second graders in the school lobby. With photos of their pen pals in hand, students were challenged to find their match. Each student was surprised with a letter and gifts from the softball players, including a Blue Hen hat, shirt and cape. In return, students gave their pen pals poems they had written for them.

After a friendly (and slightly competitive) classroom quiz in which pen pals were teamed up together to answer a mix of curriculum and softball questions, the Blue Hens taught students one of their favorite dugout chants. Both the second graders and their pen pals were grateful for the opportunity to meet, giving them a lot to talk about in their future letters.

“The students loved everything about the visit,” Ms. Steele said. “They didn’t stop talking about it all day; they told anyone that would listen.”

That day, students did their math lesson wearing their Blue Hen capes and they began writing their pen pals back that afternoon.

The softball team was equally as thrilled.

“My sister said her team loved getting to meet the kids and they asked when they could come back,” Ms. Steele said.

Although another visit might not be possible, Ms. Steele said her students will continue writing letters to their pen pals through the spring. 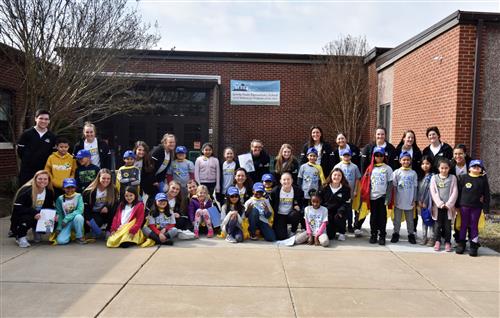 Ms. Steele's second grade class met their pen pals on Friday, February 28, 2020, when the University of Delaware Blue Hens stopped by Dean on their way to a softball tournament.